During the Vietnam War, the nickname for Da Nang Air Base was “Rocket City.” I flew into it on one of my squadron’s C-2s during Tet, 1970. Tet was the Vietnamese Lunar New Year celebration that seemed to stir up the Viet Cong and the North Vietnamese Army (NVA), although never as intensely as in the Tet Offensive of 1968.

For the next three days following my arrival, the base suffered numerous rocket attacks. The benefit of that explosive initiation was that I quickly learned to tell by their sound if they were going to hit nearby. 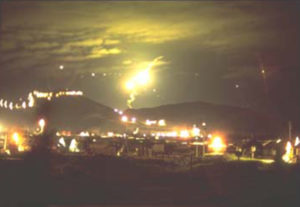 The same view as the other photo, except at night during an attack. The dotted lights on the left are from a Cobra gunship. The big glow in the center is a flare over the perimeter of the 3rd Marine Division camp. Smaller bright lights are flares from individual Marines. The yellow dot on the upper right and the bluish streak to its lower left is most probably an F-100 Super Sabre firing a rocket, a normal occurrence due to ambushes at the twisty pass on the highway that led to Hué. Photo by an anonymous VQ-1 airman from the barracks next to mine.

To be fair, the base did have a warning system: a siren that sounded after the first rockets hit. So helpful.

For the next few months, I joined American, South Korean, and South Vietnamese personnel dodging Chinese 107mm rockets, and Russian 122mm and 144mm Katyusha rockets. Mostly they just kept those of us in our part of the sprawling base awake at night as the NVA seemed to be mainly targeting attack aircraft and the fuel dumps.

Nonetheless, every now and then, they would target VQ-1, an intelligence-gathering squadron. My aircraft carrier support squadron shared hangar space with them and our barracks sat next to each other. Without VQ-1 attracting attention from the NVA, I think my time in Da Nang could have been no more dangerous than if I were at a non-combat zone duty station.

A year before I arrived  in-country, the VQ-1 barracks took a hit. Forty-five men were injured. Amazingly, none were killed. Nineteen of the injuries, however, occurred to men hunkering down in an open-top blast bunker. By the time I arrived, our squadron’s barracks had been reinforced according to the lessons learned from that attack. A wall of sandbags now protected the first floor and our bunker had a thick timber roof with sandbags sitting on top. 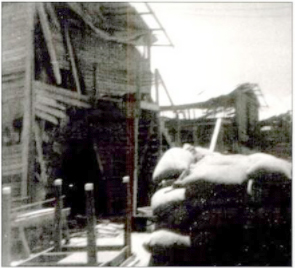 As you might expect, everyone slept on the first floor.

Sidebar: It didn’t take long for someone to come up with a good use for the top floor. Squadron saloon! Seabees supplied materials and tools to build the bar in exchange for a jeep we liberated from the Air Force and repainted. As for stocking the bar, we had airplanes and they often flew in from our squadron’s detachment in the Philippines. So, no problem getting a couple of refrigerators and stocking them with fresh-from-the-brewery San Miguel beer.

American beer available through the post exchange arrived in country from the mainland after maybe months in transit. You can imagine what sitting in hot warehouses and sloshing around in the hold of a supply ship all the way across the Pacific Ocean did to it. I don’t remember what we charged for a bottle of beer. It wasn’t much and everybody gladly paid it. End of sidebar.

The improvements to our barracks and bunker did get tested, of course. During my few months there, I survived two narrow misses from rocket fire.

The first encounter was a rare attack during a relatively calm stretch that lasted two and a half months. An airman named Neale and I had just taken a smoke break out on the tarmac while working late. On our way back to the hangar, a volley of rockets started hitting in our vicinity.

We made a dash for a shallow roadside ditch and flattened ourselves into the sand. Neale cracked me up by feigning terror, screaming, “These buttons are too thick!”

As you might imagine, we sobered up pretty damn fast when one of the rockets hit the closest corner of our nearby hangar.

After the attack was over, Neale and I had an involuntary reaction: we began to laugh insanely. I guarantee you it was a scary enough event, but the impact of the relatively small rocket was about 40 yards away, and OK, we were pretty stoned.

My second close encounter during an intense series of attacks in late April and early May was different. Much different. I still vividly recall the sudden panic of being awakened by the deafening blast of a large rocket striking immediately outside our barracks. In the brief yellow light of the explosion, I saw myself and the guy in the neighboring bunk scratching our way through mosquito netting as dust and debris spun around us. I assume my eyes were as wide and round with fear as his were.

More rockets hit nearby and we became part of a squadron-sized mob madly scrambling through the dark for a bunker that was suddenly too far away.

All these young men stumbling, bumping into each other, and jamming up in the doorway gave me the impression of a bunch of terrified roaches getting caught in the open at a square dance. It would have been hilariously slapstick had we not been so seriously intent upon saving our lives.

Electricity had been knocked out, so within the bunker it was as dark as the inside of a coffin. A few guys produced Zippos and we made sure everyone who should be there really was. Then, except for the occasional murmured comment, we became silent, thoughtful.

Except for one guy. I won’t give his name. He would sit in the bunker, fully clothed and wearing his helmet and flak jacket, moaning in terror during each of these events. No matter how far away the rockets were hitting. By contrast, many of us, if we heard the clicking sound of rockets passing overhead, wouldn’t even go to the bunker. So, he came across as a total wuss. In his defense, he had a young wife he dearly loved and a pair of brand new babies at our squadron’s home base in Japan.

Minutes after the barrage ended, our adrenaline levels began to abate.

Eventually, someone giggled. A couple of us chuckled in response. Suddenly, our dark, little dungeon filled with riotous laughter.

Weird, I know, but I think it just felt that good to be alive.